He graduated the Budapest University of Technology and Economics (BME), Faculty of Architecture. After graduation he worked for two years in state architecture firms, then was admitted to Vándoriskola of Kós Károly Egyesülés. During the postgraduate master school he worked with Kampis Miklós and Makovecz Imre – architects honoured with Kossuth-Award – among others in building the Hungarian Pavilion on Seville Expo’92 in Spain. After finishing Vándoriskola he joined the architectural section of the Society of Village Development (FFT) and as direct colleague of Kemény Bertalan he was leading the architectural section and helped to create the nation-wide „network of village trustees” („falugondnok hálózat”).

As the principal architect, he is successfully helping to preserve the vernacular architecture and to provide the sustainability of the officially and intellectually unsupported villages. In 2009 he got a second degree at BME, Department of Urban Studies, major in Local Principal Architect. As a result of his scientific work he wrote the book „Balaton-felvidék tájba simuló népi építészete” (Cser Kiadó, 2009) with Somogyi Győző. In 2008 he was elected chairman of Society of Village Development (FFT). As a member of the College of Principal Architects (OFK) and of the Association of Hungarian Architects (MÉSZ) he was invited to lecture on numerous conferences about social upheaval, architectural values of villages and small towns and about rural development. As the chairman of the Society of Village Development (FFT) he leads and organizes a seminar about villages with the Association of Hungarian Architects (MÉSZ) called „Csütörtöki Iskola”, which is seeking solutions for officially and intellectually unsupported villages to become more self-supported, to reinterpret their needs and traditions, to rediscover their values. Since 2011 he has been a board member of the Hungarian National Rural Networks (MNVH) which is the Hungarian committee of European Network for Rural Development (ENRD). He has initiated the nation-wide network of „Nagyapám Háza” (My Grandfather’s House) Master-Valet training, where the aim is to show the virtues of the traditional techniques and of vernacular architecture by restoring rural houses. This is the best way to learn how a house can be integrated to the landscape. This work might lead to the renaissance and survival of vernacular houses so their undeniable values can last to posterity. For researching, preserving and popularizing the vernacular architecture he gained the Order of Merit of the Republic of Hungary in 2012.

His versatile architectural work can be found in different parts of Hungary, mainly on Balaton-felvidék. He gained Architectural Award of Excellence several times for his public and residential buildings. His accomplished buildings have the peculiarity of human proportion, the use of materials that are in harmony with the landscape, the creative conformity to the spirit of the place and the built environment. He designs modern organic buildings that don’t imitate or quote, but where the spirit of the place and the time are in strong harmony. His works justify the fundamental thesis, that the organic architecture is not a style, but a way of thinking and behaviour, a special relation to life. In 2006 he gained Kós Károly-Award for preserving values and improving environment on settlements. In 2012 he was honoured with Ybl Miklós-Award for his high quality architecture and in 2013 he won the PRO ARCHITECTURA Award, a prestigious official recognition by the ministry for outstanding architectural achievements of architects and designers of Hungary.

Transformation and Extension of the Central Building of Zanka

Current building
The main building of Zánka Next Generation Centre was built in the northern shore of Lake Balaton in the early 1970s, and its modernist style is typical of the era. Regarding architectural features it is a composition of a long-stretching ground floor service building and a tower building located behind it. The simple, white limestone-covered kubus of the seven-story tower standing free at the youth centre’s main entrance can be seen from a distance, reaching far above the crown of the surrounding trees. The main entrance of the building for public use is located at the southern side. The main entrance hall, reception and sales and marketing offices are located in the ground floor of the service building. You may find the institution’s library and a small museum room here, as well as a restaurant and a café in the eastern wing. The seven-storey office tower building there are service rooms, corridors and a youth hostel. 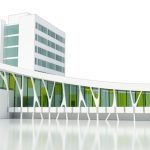 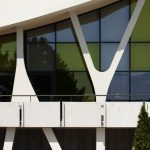